Logic World Wednesdays: Beta Than Ever

On Monday of this week, we started beta testing!

A few select individuals have gotten advance access to Logic World. These folks are helping us perfect the game by finding bugs and giving feedback on features. They’ll also be building contraptions to help us with marketing the game.

Beta testers have no restrictions on sharing their experiences, so from this week forward you’ll have a lot more Logic World content to look forward to!

Check out the first CPU in Logic World, built by @Mr_IO:

And check out this awesome synchronous program counter from @TheWildJarvi:

Beta testers are often sharing screenshots and videos on the Logic World Discord, so make sure you’re hanging out there if you’re not already. Furthermore, we’ll soon be setting up Steam Broadcasting for Logic World, so keep an eye out for that.

Edit: Steam Broadcasting is live! Go to the Logic World Steam Page, where our beta testers are streaming their gameplay :)

Without further ado, let’s get into this week’s Wednesday!

Hello everyone, and happy Logic World Wednesday! I’m happy to share one of my pieces called When Time Waits with you today. It’s about the ephemeral moments in our lives when time seems to stand still. I hope you enjoy this piece and look forward to hearing what you think.

Right after we got the Logic World game uploaded to Steam, I started working on also uploading the dedicated server. This will allow you to run a dedicated server on any platform directly from Steam, or also with the SteamCMD utility. 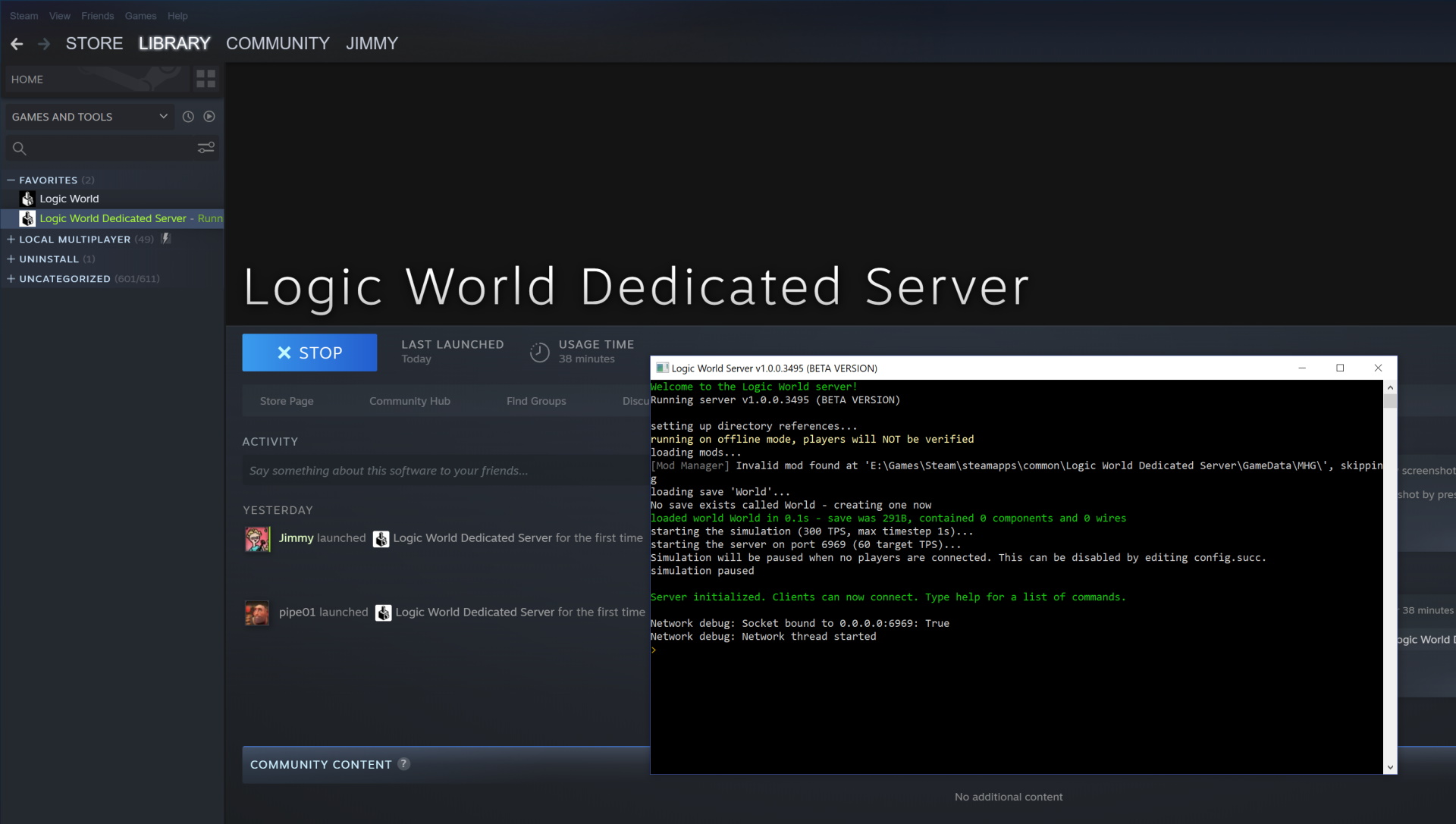 I added some settings that let you customize how your player moves!

In preparation for beta testing, I spent most of this week fixing bugs – literally hundreds of them. For a while I’ve had a bad habit of ignoring bugs and thinking “oh, I’ll get to that later.” But this week I really sat down to grind out fixes; I wanted our beta testers to have the best possible experience when they played the game for the first time.

Of course, when they did play the game, they immediately found hundreds more bugs. So it was back to grinding.

Slowly but surely, Logic World is becoming a stable and bug-free product. With the help of our testers, I am confident that Logic World v1.0 will not be a terrible buggy mess :)

Last week, I showed that I’d gotten Logic World working on Mac OS. I showed a screenshot of the main menu, but there were still many issues with the game. You couldn’t actually play the game; mouse input was frozen and no 3D geometry was rendered, among other issues. This week, I’ve fixed them all up, and there are (probably) no longer any Mac-only bugs! Just bugs that exist on Mac and also everywhere else. Biiiiig shoutout to my friend Keaghan, who happily lent me his macbook for a week longer than he thought he was going to :)

This week we upgraded Logic World from Unity 2019.2 to 2019.3. We did so initially in an attempt to fix a major bug (it didn’t work and we fixed it a different way), but it’s good anyways to be on the latest version.

Performance in 2019.3 has been noticeably increased, both in the editor and in compiled games. Logic World itself is faster now, but it’s also faster for us to work on.

There are a few more features of 2019.3 that we want to take advantage of in Logic World. You should be seeing those next week :)

That movement settings are amazing! Will it be possible to make a mod to add third movement speed, like very very fast one?

Will mods be able to hook logic updates?

i loved the second half of markku’s song the most, it had real punch imo

I’m finding the name of Max Coyote Time potentially misleading. I’m assuming that it is in reference to the coyote from Looney Tunes where he takes a while to start falling after running off cliffs. That makes me think of the trick that lots of platformers do where the player can still jump for a few hundred milliseconds after running off ledges when in fact it is about the window of queuing a jump input prior to landing. Am I reading to much into it?

You’re correct that this is what the name is in reference to. However, the setting isn’t called Max Coyote Time, it’s called Max Inverse Coyote Time :)

🤦 I completely missed that. Very intriguing name either way :)

We are very lucky to have Markku :)