After a refreshing and rejuvenating break, we are back and hard at work on Logic World! 2021 is going to be an excellent year for this game, and we couldn’t be more excited about making it for you. So, without further ado, let’s get into what we’ve been working on this week!

The first big task I tackled when I returned from vacation was to make the Multiplayer Menu! I’m really pleased with how it turned out, under the hood it’s one of the most complex menus I’ve ever made.

The Multiplayer Menu requires a lot of networking functionality, and so while I was working on the menu I took the opportunity to beef up our network code. There were many lovely upgrades, but the two highlights are:

Making this menu was very difficult and time-consuming, far more so than I expected going in. I had a lot of fun learning about networking, but I’m really glad I never have to do it again.

As can be seen in the video above, there are presently two authentication modes for Logic World servers: Unverified and Verified. Unverified servers will allow any player to join, with any username, and this identity is not checked at all. Verified servers only allow players to join who are logged into their logicworld.net account, and it is impossible to fake your identity to a verified server.

Verified mode is useful when you want to have a whitelist of players who are allowed to connect to your server; only the people who are really on your whitelist will be able to connect. But it’s less useful if you want to have a public server and ban players from it. Because creating a logicworld.net account is free, a banned player can simply create a new identity and rejoin your server.

With this in mind, we are considering the addition of a third authentication mode to servers, “Super-Verified”. In Super-Verified mode, the server would only allow connections from players who are logged into their logicworld.net account, and whose accounts are verified owners of Logic World. This means that to evade a ban, a player would have to buy another copy of the game, which they are a lot less likely to do than simply create a new account for free. However, Super-Verified mode would introduce hassle for players; unless you purchased directly from logicworld.net, you would be required to link your logicworld.net account with the account you purchased the game on (i.e. Steam) before connecting to a Super-Verified server.

Let us know in the comments, on discord, or in an email :)

When I returned from my vacation, the first thing I needed to do was to test the services that I had migrated from Nitro to mice. I could have just created a “test” service that was hard-coded to call certain methods on certain services, but that’s a very inflexible way of doing it. With that in mind, I started the MiceUI project. This project consists of an Electron application that lets you load protobuf files containing the method definitions of a given service, and then lets you send requests to the service instance and inspect the response. 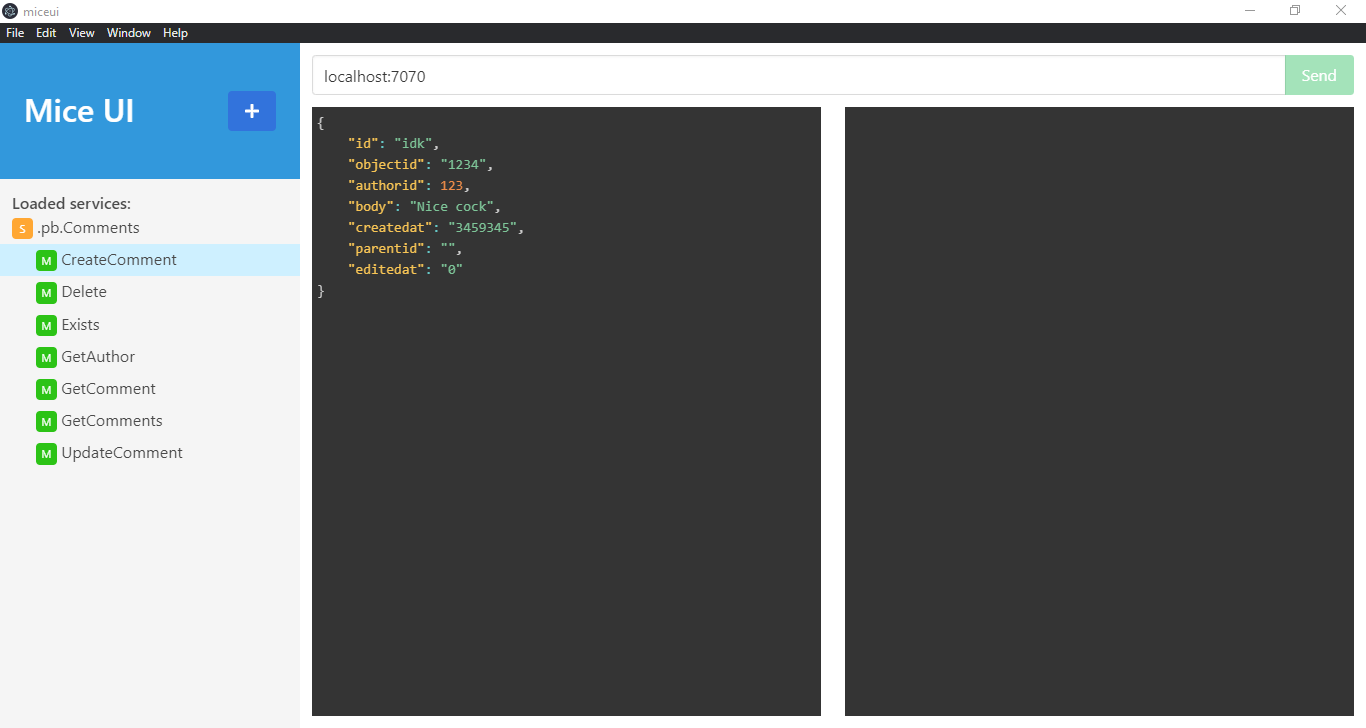 This tool will let me test each and every one of a service’s endpoints, making sure that the service is working as it should. In the future I plan on upgrading MiceUI with some sort of test suites, automating the process of E2E testing and even integrating it into the site’s CI pipeline.

Many of our beta testers have been playing with the menu themes capability of LogicUI, and many more of you in the community have voiced interest in doing so. Until now, making new themes was very difficult, requiring tedious manual editing of individual RGB values in a config file, and you’d have to restart the game to view the results of your labor. I decided to make this process easier, and added some in-game UI for making a custom menu theme.

Even Beta than Ever

We’ve added several new testers to our internal beta! These lovely folks are helping us track down bugs, giving great feedback about features, and making cool content to showcase the current state of the game. There is a bunch of said cool content in the #beta-content channel of our discord, so join us there if you haven’t already and check it out!

And if you haven’t seen it yet, shortly into the break we held a big multiplayer playsession with a bunch of the beta testers. Jimmy’s perspective of that event is up on youtube:

I mentioned that the testers have been helping us find bugs, and well, holy moly they’ve helped us find a lot of bugs. An absolute tidal wave of them. Here are just the ones we’ve fixed…

This Christmas might possibly have been the best Christmas ever. Jimmy’s mom and brother Andrew teamed up to make two pairs of got dang Logic World socks, giving one pair to Jimmy and sending the other across the ocean to Felipe. 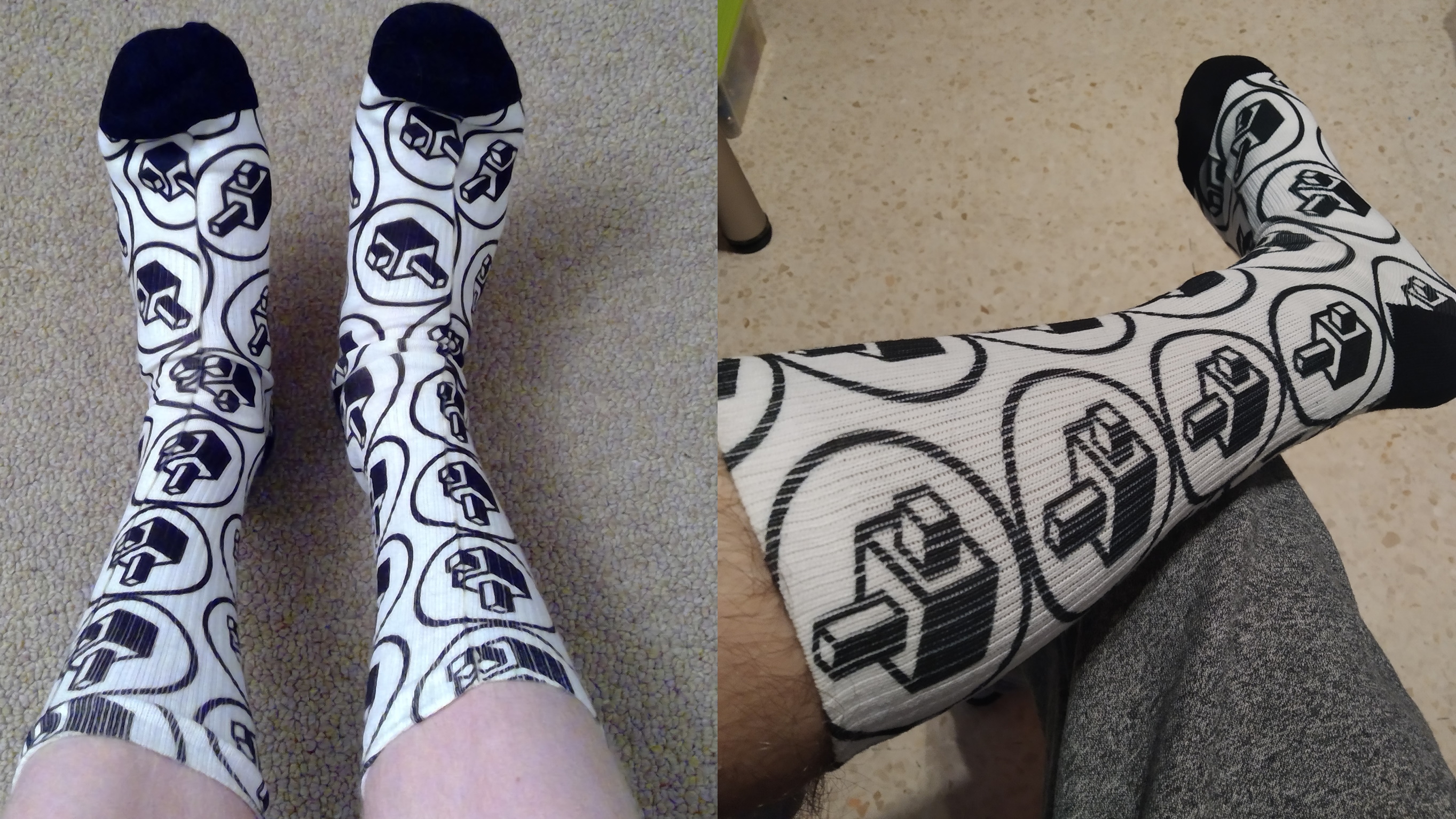 Thanks for reading our blog :) lots of fun stuff is coming up, so watch this space. We absolutely cannot wait to get this game done and into your hands.

To get updates on Logic World beamed directly into your inbox, you can sign up for our newsletter. Be sure also to wishlist Logic World on Steam and join the official Discord.

Sell me this beta.

I really appreciate your enthusiasm, but the volume of feedback and bug reports we’re receiving with this small tester group is already overwhelming. We’re holding off on adding more testers until the game is more polished and bug-free.

The wait for the full release should not be too much longer now. Hang in there friendo

Welcome back to development :)

Multiplayer GUI:
The Multiplayer-GUI looks decent! (An alternative to a deletion confirm button would be an “undo” option, but that are thoughts for post release).

Auth modes:
In the mode without verification, how/where does one set his/her username?
The two simple modes seem very good already. I see a few problems with the third option though.
Your argument of “making it more difficult to quickly create accounts” is a very good one, for the users.

Mice and Nice:
Test the hell out of it!

Theme Editor:
In fact I thought of it recently, so yeah its nice! Not that I gonna use it… But nice.

Nutshell:
If you keep it going you eventually will start to fix the actual game!!! (Jk you have many fixes there - all good).
PS: Nobody uses the comment section sad

Welcome back to development :)

Thank you, and thank you! 😄

Undo delete is tricky here. We’d need to display to the user with the UI somehow that undo is an option, or they won’t know about it. And I’m not sure of a good way to display that option that wouldn’t be cluttery and awkward. But if you need faster deleting, then the confirmation dialog will be skipped if you hold “shift” while pressing delete. (This is true of every place in the game with a delete confirmation dialog.)

Regardless, removing a saved server from the list is a task that most folks won’t be doing very frequently, so making the workflow really smooth here isn’t a super high priority – as you mentioned :)

Auth modes:
In the mode without verification, how/where does one set his/her username?

As @Ry mentioned, this is done in a text box in the Settings menu under the Multiplayer tab. Default offline usernames are randomized so there won’t be conflicts.

Which action will you do against this problem? Requiring an email on account creation?

An email is already required on account creation. You’re right that this is not terribly difficult to bypass for somebody determined to cause trouble.

Further, if there is a more secure way, you need/have to ensure linking (payment confirmations) possibilities.

We definitely wouldn’t do a Super-Verified mode unless it would work with every retailer that officially sells the game.

Thank you for all your thoughts on authentication modes, I appreciate it!

Nutshell: If you keep it going you eventually will start to fix the actual game!!! (Jk you have many fixes there - all good).

I think this is mostly because the comment section interface is a bit janky right now. The comments section was used much more on the old site, but the remake a few months ago had several downgrades in terms of UI. Felipe and I have talked about this, and he’ll be improving things soon, but webdev has been a bit slow recently because he’s so busy with school.

Regardless, thank you for using them :)

Definitely also my main concern, thus definitely (if ever) post-release.
But if you can skip the delete dialogs with shift, there is nothing to complain :)

It actually works quite fine… ignoring the facts: When editing a message, the text-field is “small” (for my style of messages), and the freshly reported issue, that email-links to comments result in a 404. And another point which might scare people is, that there is no shift-enter -> newline. So no reason to complain or? :P (Oh and no images - another big point - fine for me though)

But hey, I have a whole thread on this website full of reports, lets go at pipe01’s pace. School goes first.

There is a setting called “Offline Name” which is the name used when your offline or on a non-verified server. it is in the multiplayer tab

Thanks for telling me :)

Ecconia just fyi I love your in-depth thoughts and ramblings.